This week in Reception…..

We have been finding out about the landscape that the dinosaurs lived on. We found out that there were lots of active volcanoes.  The children wanted to know what was inside them, how they erupted, are there still volcanoes now and how the dinosaurs died. We watched some videos and used a Non-Fiction text to find out this information. The children were absolutely fascinated and captivated by what they heard and saw. We started off by finding out what the children already knew and what they wanted to find out. We learned some new vocabulary and have been using this throughout the week. We learned the words magma, lava, liquid rock, eruption/erupt and explode/explosion. We carried out two experiments to show what happens when volcanoes erupt. We did the Coke and Mentos experiment and used bicarbonate of soda, red food colouring and vinegar for the other experiment. We have also been painting volcanoes and writing about what happened in our experiments and information we found out about volcanoes. 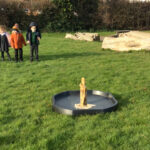 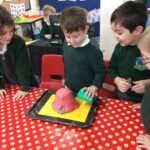 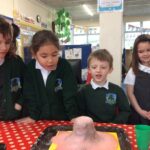